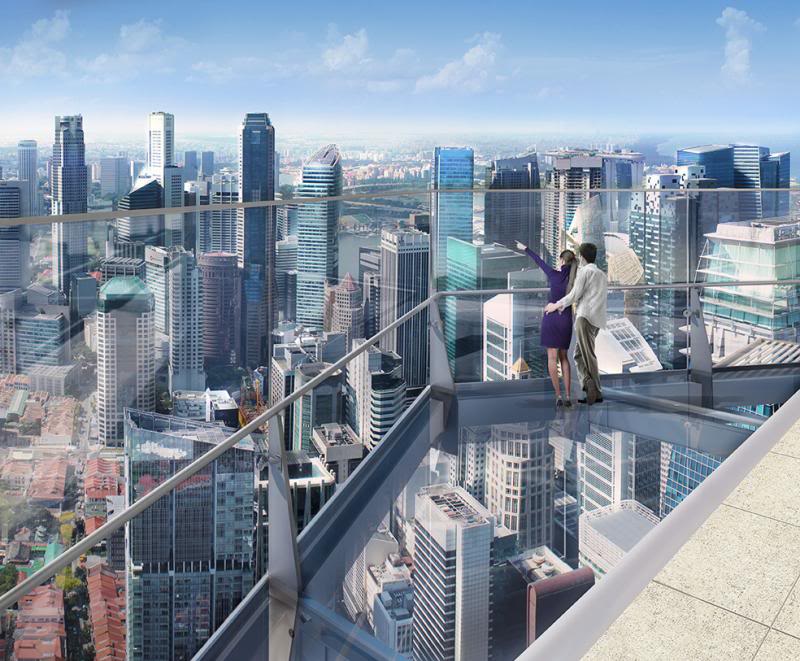 About 10 per cent of the office space at Guoco Tower in the integrated Tanjong Pagar Centre project, and 60 per cent of retail space, have been committed some 6 months ahead of the project’s completion.

Guocoland shared these figures on Wednesday at a topping-out ceremony, graced by Minister for National Development Lawrence Wong, for the S$3.2 billion flagship project.

Guoco Tower has a total net lettable area (NLA) of 890,000 sq ft. The 10 per cent of office lease commitment includes the space to be occupied by GuocoLand Group and Hong Leong Bank, both members of Hong Leong Group.

GuocoLand is consolidating its various operations from Tung Centre at 20 Collyer Quay and Robinson Centre into its flagship project, whereas Hong Leong Bank is relocating from 20 Collyer Quay. The exact floor space they will each take up at Guoco Tower is not revealed.

If current negotiations with potential office tenants bear fruit, leasing commitments for office space at Guoco Tower will go up to 50 per cent.

GuocoLand’s Singapore managing director, Cheng Hsing Yao mentioned that there is a healthy pipeline of interest for Guoco Tower, and leasing commitments are expected to pick up in the next few months.

“We are currently in discussions with more than 30 companies from diverse industries such as finance, technology, insurance, fund management, consumer, services, trading and law firms,” he told BT. “In terms of space, about one third of these companies are looking at multiple floors while a majority of the rest are looking at a range of 20,000 to 40,000 sq ft in floor size.”

At the briefing on Wednesday, he highlighted that the office leasing market, while not as exuberant as a few years ago, is “not a dead market”, with leasing activities still ongoing.

Tenant movements are driven by the need to upgrade to newer Grade-A premises with higher specifications and efficiency, or to consolidate or expand, he noted. “More and more tenants are realising that this might be a very good time to move.”

With the higher efficiency offered by large column-free floor plates (27,000-30,000 sq ft) at Guoco Tower, a more diversified tenant mix has also appeared. Mr Cheng noted that this is unlike a few years ago, when a single mega tenant could occupy half or three-quarters of a project.

Guocoland also highlighted the strong value proposition of the Tanjong Pagar precinct, that is undergoing a rejuvenation with other developments coming on-stream.

Once fully operational and occupied, Tanjong Pagar Centre is estimated to have 13,000 to 14,000 people working and living there or visiting each day, GuocoLand president and CEO Raymond Choong observed.

By the end of 2016, the catchment population in the immediate vicinity and within a 500-metre walking radius of Tanjong Pagar Centre is projected to reach more than 118,000 persons.

“These figures further demonstrate and reinforce the potential of Tanjong Pagar Centre as well as ensuring its success,” Mr Choong said.

Most of the committed leases and leases under discussion are with companies already in operation in Singapore. Leasing commitments are expected to start accelerating as the project nears completion, with negotiations with sizeable occupiers currently underway.

Office occupancy rates in Singapore now hover above 95 per cent, with rents for prime CBD office space averaging S$10.28 per square foot per month as at end-2015, after a 10 per cent decline for the whole year.

Tanjong Pagar Centre will open in phases from the second half of 2016. It will also house a 5-star hotel, luxury residences, and a 150,000 sq ft Urban Park, and will be Singapore’s tallest building at 290 metres when it completes in mid-2016.

The previous week, GuocoLand announced the appointment of Accor Hotels to manage the 222-room Sofitel Singapore City Centre at Tanjong Pagar Centre. The 181-unit luxury homes, renamed Wallich Residence, was soft launched in 2014. Some 16 units were sold at an average pricing of S$3,100 psf.

Mr Cheng said Wallich Residence will be re-launched later this year. He foresees demand picking up when the project is completed, as was seen in the group’s earlier luxury projects Leedon Residence and Goodwood Residence.

Mont Botanik Project Launching in 2nd half of 2018 . New freehold condominium development by Tuan Sing . Located in the Hillview area